Generally speaking, I think if you are nominated for an award and you bother to attend the ceremony, it’s good manners to have a speech prepared, just in case. I hate it when folks get up on stage and say ‘ooh, I never dreamed I’d be the winner.’ Fortunately I managed to blurble some appropriate thanks to Paper Cities editor Ekaterina Sedia and Senses Five Press when I got up to accept the best short fantasy award on Saturday night, but the serious achievement was not falling off my high heels and tumbling down the stairs to break my neck. Note to future self: if nominated, don’t sit in back row, just in case… I must admit to being very disappointed that Rob didn’t win best collection. He lost to the ever awesome and gracious Sean Williams who acknowledged Rob in his speech (and who we were sharing an apartment with!). I was mighty surprised when Kim Westwood and Margo Lanagan did not take out best SF and Fantasy novel respectively. To me, both were worthy, literary, interesting and original books which had AA winner stamped all over them. Just saying… Kim’s fantasy story ‘Nightship’ was the one I expected to beat mine. I thought it was gonna be her night. My winning story is actually a prologue to Sammarynda, the novel I’ve been hammering away on for years. The protagonist’s back story. I’m going to take the win as a good omen as I struggle through the last week of my unpaid leave trying to make the novel come together.

Of my story, the judge’s report said: Long after reading, this is a story that returns to haunt the reader.  From the very first word, "Sammarynda Deep" drags you into a world both wonderfully exotic and strange, yet undeniably familiar in the emotions and ambitions that drive its inhabitants.

The funniest moment of the evening was when a young woman from HarperCollins, Natalie, introduced herself to me as one of the fantasy judges. As we were talking about my story, she suddenly stopped, peered at me closely and said ‘were you at the Roger Moore literary lunch a few weeks back?’ Far out! There were hundreds and hundreds of people at that thing! She remembered me cos I was running around taking photos like a coked up papparazzi.

This year’s AAs were huge. The auditorium was packed and the crowd was downright GLAM. The lobby seemed to be full of gorgeous young women in sparkly frocks. I got a bad case of bunny in the headlights and felt quite overwhelmed by it all, despite being an award winner and knowing half the people there. I experienced moments of feeling like I didn’t belong. I dunno, maybe it was just that I didn’t get smashed. Weird, huh?

I didn’t take many photos this time because my camera’s autofocus malfunctioned and my eyesight isn’t up to manual focusing in a dimly lit lobby. These photos were taken by Steven Dunbar (Margo’s hubby). Me with Margo Lanagan and Kirstyn Mcdermott 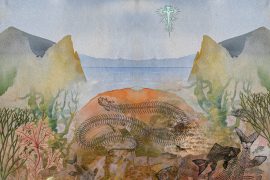 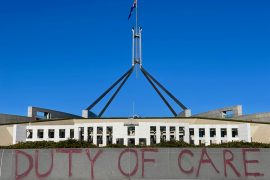 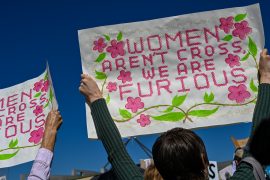